TIMKEN bearings are precision mechanical basic parts. It is important to use TIMKEN bearings correctly. In the technical work of bearings, we often encounter the problem that the bearings are qualified after testing, but the bearings are stuck after installation or the early rotation failure when used. It mainly shows the sense of stagnation of rotation, severe peeling of the working surface, severe wear and tear, even twisting and breaking of the cage. The analysis of the failure results shows that there are not many quality problems of the bearing itself, most of them are caused by improper installation and use.

Contact fatigue failure refers to the failure of bearing working surface subjected to alternating stress. Contact fatigue spalling occurs on the working surface of the bearing and is often accompanied by fatigue cracks. It first occurs from the maximum alternating shear stress below the contact surface, and then spreads to the surface to form different spalling shapes, such as pitting or pitting. Peeling into small pieces is called shallow peeling. Due to the gradual expansion of the exfoliation surface, it often expands deeper and forms deep exfoliation. Deep spalling is the fatigue source of contact fatigue failure. TIMKEN 687 bearings online , pls click here : 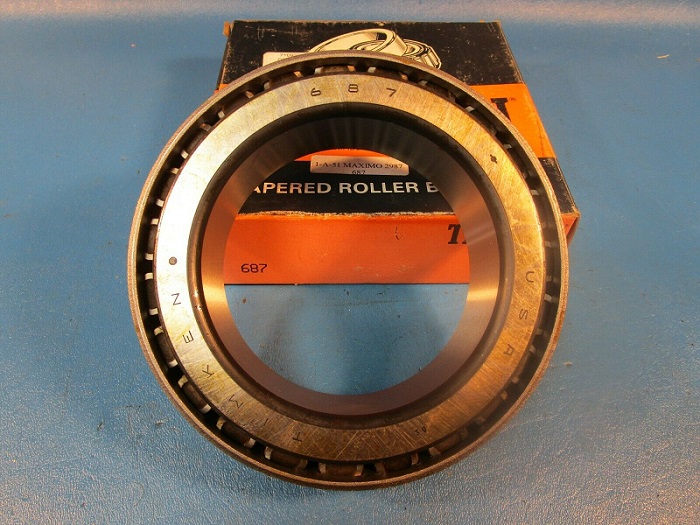 Wear failure refers to the failure caused by the continuous sliding wear of the metal on the working surface due to the relative sliding friction between the surfaces. Continued wear and tear will cause gradual damage to bearing parts, and eventually lead to loss of bearing dimensional accuracy and other related problems. Wear may affect the shape change, the increase in the clearance and the change in the shape of the working surface may affect the lubricant or contaminate it to a certain degree and cause the lubrication function to be completely lost, so that the bearing loses its rotation accuracy and even cannot operate normally.

The main reasons for the failure of TIMKEN bearings are defects and overload. When the applied load exceeds the material strength limit and the part breaks, it is called overload fracture. The cause of overload is mainly the sudden failure of the host or improper installation. Defects such as micro-cracks, shrinkage cavities, air bubbles, large foreign particles, overheated tissues, and local burns of bearing parts can also cause fractures at the defects when they are impacted, overloaded, or severely vibrated, which is called defect fracture. Generally speaking, the most common bearing failure failures are overload failures.

Symmetrical peeling occurs when the inner ring is peeled off from the surrounding annulus, while the outer ring is peeled off at a circumferentially symmetrical position (that is, the short axis direction of the ellipse). This is particularly evident in camshaft bearings for motorcycles. When the bearing is pressed into the housing hole with a larger ellipse or the two-half split housing is tightened, the ellipse of the bearing outer ring is generated, and the clearance in the short axis direction is significantly reduced or even negative. Under the effect of the load, the inner ring rotates to produce circumferential peeling marks, and the outer ring only produces peeling marks at symmetrical positions in the short axis direction. This is the main reason for the early failure of the bearing. Examination of the failed parts of the bearing shows that the outer diameter roundness of the bearing has changed from 0.8 μm controlled by the original process to 27 μm. This value is much larger than the radial clearance value. Therefore, it can be affirmed that the bearing is working under severe deformation and negative clearance, and abnormal sharp wear and peeling are likely to form early on the working surface. The countermeasures adopted are to improve the processing accuracy of the shell hole or to avoid the split structure of the shell hole as far as possible.

(3) The raceway is inclined to peel off

The inclined peeling ring belt on the working surface of the TIMKEN bearing shows that the bearing is working in a tilted state. When the tilt angle reaches or exceeds the critical state, it is easy to form abnormal sharp wear and peeling at an early stage. The main reason is that the installation is poor, the shaft has deflection, and the accuracy of the journal and the shell hole is low. Take measures to ensure the quality of the bearing installation and improve the axial runout accuracy of the shoulder and hole shoulder.

(4) The ferrule is broken

Fracture of the cage is an occasional abnormal failure mode. The main reasons are as follows:

a. Abnormal load on the cage. If the installation is not in place, the tilt, the interference is too large, etc., it is easy to reduce the clearance, increase the friction heat, soften the surface, and abnormal peeling occurs prematurely. With the expansion of the peeling, the peeled foreign matter enters the cage pocket and causes maintenance. The stalling of the cage and the additional load increase the wear and tear of the cage. Such a deteriorating circulation may cause the cage to break.

b. Poor lubrication mainly means that the TIMKEN bearing is running in a lean state, which is easy to form adhesive wear, which deteriorates the working surface state. The tear caused by the adhesive wear easily enters the cage, causing abnormal load on the cage and may cause the cage to break. .

d. Creep phenomenon is also one of the reasons that cause the cage to break. The so-called creep multi-finger sliding phenomenon, when the interference of the mating surface is insufficient, the load point moves in the surrounding direction due to sliding, resulting in the phenomenon that the ferrule deviates from the shaft or the housing in the circumferential direction. Once the creep occurs, the mating surface wears significantly, and the wear powder may enter the inside of the bearing, forming abnormal wear-raceway peeling-the process of cage wear and additional load, which may cause the cage to break.

In summary, from the common failure mechanisms and failure modes of TIMKEN bearings, although rolling bearings are a precise and reliable mechanism foundation, improper use can also cause early failure. In general, if the bearing can be used correctly, it can be used until the fatigue life. The early failure of TIMKEN bearings mostly comes from factors such as the manufacturing accuracy, installation quality, use conditions, lubrication effect, external foreign body intrusion, thermal influence and sudden failure of the host's matching parts.

Therefore, the correct and reasonable use of TIMKEN bearings is a systematic project. In the process of bearing structure design, manufacturing and installation, for the links that produce early failures, corresponding measures can be taken to effectively increase the service life of TIMKEN bearings and the host.