The Mechanism of TIMKEN Bearing Vibration

In principle, the vibration caused by TIMKEN bearings can be divided into two categories:

One is the vibration related to the elasticity of the bearing;

The second is vibration related to the condition of the rolling surface of the bearing.

2. The mechanism of TIMKEN bearing vibration

Generally, because the uneven shape of the rolling surface is irregular, the exciting force also has a random nature. It has a variety of frequency components. The vibration system formed by the bearing and the housing will vibrate due to this force. Random vibration composed of various frequency components.

In order to deepen the understanding of the vibration characteristics of rolling bearings, Eric Bearing Limited will further discuss the various vibrations caused by TIMKEN bearings.

When TIMKEN bearings are working, impacts may occur between the rolling elements and the inner ring or outer ring to induce the natural vibration of the bearing components. Since the natural frequency of each bearing element only depends on its own material, shape and quality, it has nothing to do with the speed of the shaft.

Vibration caused by changes in bearing stiffness. When the rolling bearing is running flt under a constant load, due to its bearing and structure, the stiffness parameters of the system form a periodic change, and it is a symmetric periodic change, so that its restoring force is non-linear The characteristics of the resulting fractional harmonic vibration.

In this way, when the TIMKEN bearing is in motion, due to the periodic changes in the stiffness parameters, the exciting force generated by the rolling elements, and the non-linearity of the system, multiple harmonic vibrations are generated and contain fractional harmonic components, regardless of whether the rolling bearing is normal or not. Vibration will happen.  TIMKEN  M349549-20004 bearings online , pls click here : 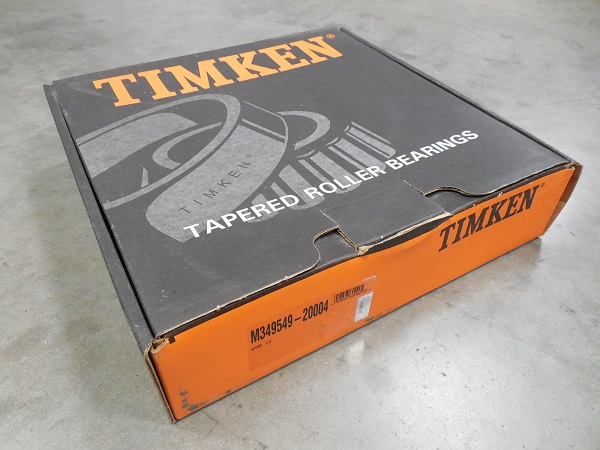 4. Vibration caused by the motion pair of TIMKEN bearing

The characteristic frequency of the TIMKEN bearing (ie the fundamental frequency of contact excitation) can be obtained from the equation established by the velocity relationship of the rolling contact between the bearing components. The characteristic frequency value calculated by it is often very close to the measured value, so these values ​​are always calculated before diagnosis as the basis for diagnosis.

6. Vibration caused by various abnormalities (use damage) of the bearing

Such abnormalities include surface wrinkles and abrasions that have a long elapsed time and gradually deteriorate the entire circumference of the bearing rolling surface. The abnormal vibration when the bearing produces surface cracks has the same properties as the vibration of the normal TIMKEN bearing, that is, the waveforms of both vibrations are irregular, and the probability density distribution of the amplitude is approximately a normal distribution, which is similar to that of the normal bearing vibration. The only difference is that surface wrinkles are accompanied by larger amplitudes. Therefore, the effective value and peak value of the vibration are larger than normal.

Surface wrinkles will not directly cause immediate damage to the bearing, and the degree of damage is much smaller than the falling off and burning of the underlying surface. However, surface wrinkles are inevitably the fuse that causes these serious abnormalities.

Such anomalies include such abnormal forms as surface spalling, cracks, indentations and other local damage to the rolling surface.

This abnormality is caused by the deterioration of the lubrication status and other reasons, and it will rapidly deteriorate the TIMKEN bearing in a short time. Since the time from the appearance of the burn to the inability to rotate is very short, it is very difficult to diagnose or predict this abnormality, and it is often the case that it cannot be found by regular inspection.

However, it is impossible to have no signs at all. In the process of reaching the burn, the vibration value of the bearing increases rapidly with impact vibration. Practical experience tells us that the abnormality of vibration can be known earlier from temperature changes. It can be seen that it is possible to prevent burning accidents in the first place if vibration is frequently monitored.